At first glance, it might sound impossible. Rustproofing your car isn’t a pipe dream or an impossibility. It’s a reality, and one of the best ways you can protect your car. In fact, depending on where you live, it might be a necessity. Rust can cause all different kinds of problems for your vehicle. Rust-proofing that may come from the factory often isn’t enough to actually protect your car. Remember, they want your car to last, but not for that long. That way, you can buy a new car. Our rust-proofing products can help your car to stand the test of time.

Why Rust Proofing your Car is Important

It’s easy to think of rust as a nuisance, something that just makes your vehicle not look so nice. However, it can cause far more significant damage than that. That being said, you don’t want rust to appear on your vehicle period. A vehicle with obvious, visual rust on it doesn’t look nearly as nice as a rust-free one. When you take your car out, you want to turn heads for the right reasons. Besides, many of us plan on getting a good resale value on our vehicles someday, which is hard to do with rust. Even if rust caused no damage to your vehicle whatsoever, you’d still want to rustproof it.

Of course, rust can cause significant. The most obvious damage rust can cause is often to the body. That exterior comes into contact with the air, which of course can eventually result in rust. This can happen even faster if something eats away at your paint job a bit, whether it’s dings, dents, or even bird droppings that haven’t been cleaned. Once the metal is exposed, rust begins. Rust doesn’t stop. Once it’s there, it eats and eats, possibly compromising the structure of your vehicle over time. 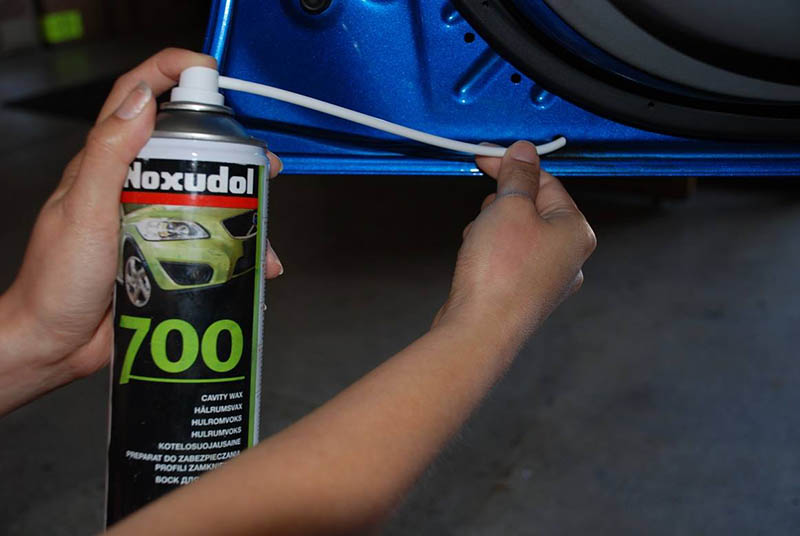 Rust can also do a number on your electrical systems and engine. From window controls to the brakes themselves, anything that comes into contact with metal structures in your vehicle is at risk of rust damage. Exhaust system mounts and even the trunk can be damaged by rust, too. The latter can be particularly troublesome, as it can cause air or even water leaks in your trunks. As you can see, rust has a ripple effect. What doesn’t seem like such a bad problem one day becomes far worse the next. That’s why rustproofing as early as possible is so critical.

By that same token, we’re able to offer rustproofing at affordable prices, too. After all, you’re trying to stop the rust from eating away at your car. It’s hard to do that when rust-proofing products are eating away at your paycheck. So, if you go to our site, you’ll notice that Noxudol products are typically between $20 to $30. That way, everyone who wants to be able to afford rust proofing will be able to. Additionally, that’s not so low that you’d doubt the quality of the product. We make sure to offer our highest quality products at the most reasonable rates.

Many people have a negative connotation with rust-proofing products, namely the way they smell. There is a stereotype that anything that says it’s for rustproofing has to smell like something that’s been left outside for days. However, Noxudol products have a low odor. We’re trying to stop rust, not stop you from enjoying your vehicle. That low odor means that you may not even notice any kind of smell whatsoever once the Noxudol is applied. That way, you can enjoy your new, rustproof vehicle in peace.

Friendly for Users and the Environment

Rust isn’t something that you just have to live with or accept. You can stop rust from building on your car so that you can enjoy it for that much longer. To rust-proof, your vehicle, check out our site or give us a call at 800-997-6536.

2 Responses to “Importance of Rust Proofing your Car”